Haruru Falls today is a small residential settlement, about three kilometres inland from its larger neighbour, Paihia. But, in the days of early European settlement, it was the scene of many firsts.

Haruru Falls was New Zealand’s first river port and an aramoana (sea road or ocean path) for the inland Maori tribes and for the early vision boats. HMS Dromedary was one, Karere (meaning messenger’) another. Missionaries once saw 60 to 100 canoes pulled up on the mud banks.

Maori had a small settlement here where they traded. There were nine kaianga (villages) between Haruru and Waitangi.

A two storeyed hotel with accommodation was built near the Falls in 1828, first named and licensed as The Northampton Castle. For some years the hotel stood idle until Louis C Goffe saw the potential for a thriving business. So in 1856 he bought the property and added a store on the side of the hotel. He kept stores and traded in kauri gum. His wife provided accommodation and excellent food.

They acquired a Travellers’ Licence which allowed irregular drinking hours – once one had bedded down – a service suitable for ferrymen, sailors and visitors who came and went with the tides not the clock. Coaches came and went from Haruru to Horeke. Then came a Queen’s Licence and the establishment traded as Waitangi Hotel although Sarah Goffe preferred Dew Drop Inn which was written on a board above the front door.

There was Goffe’s run which held up to 100 bullocks which were trained in teams for sale. Sarah trained the lead bullocks. Telegraph was connected to the hotel – a first. When the hotel burnt down on 26 September 1937, notices told of the loss of the first select hotel in New Zealand, the first to have a ‘Bush Licence’. It was then over 100 years old.

Oil-fired beacons marked the river channel. Two scows named the Haire and the Selwyn plied the tidal river for 24 or so years loaded with kauri logs and or gum. From the 1850s on, while Paihia had the mission station, Haruru had the hotel store and seven residents.

In 1870, a cottage, one of a dozen or so pre-cut and brought out from Hobart in 1840 was bought by Goffe and Neumann and barged up to Haruru. Erected and first used as an annex for night arrivals, it was given the name, Ferryman’s Cottage. It was so used until Peter Goffe married Hilda Neumann when they set up home in the cottage.

From here, Hilda ran a Post Office before Paihia. Haruru’s stamp said Paihia Station. The first telephone came to Haruru in Yorke’s home but Mrs. Yorke aid it wasn’t natural so it was shifted to Hilda’s cottage where one could use the phone for one shilling (ten cents) between 9:00 a.m. and 5:00 p.m. 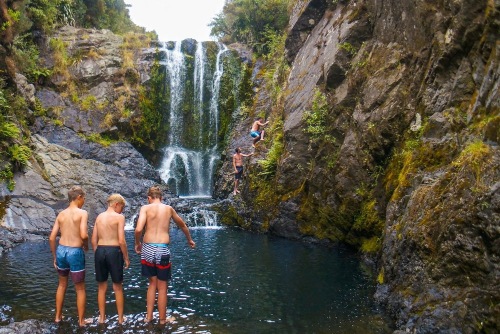 The road from the river’s edge to the main road was called Cherry Tree Lane, the first recorded road, formed before the first surveyed Waimate to Kerikeri road. An AA sign, until only a few years back read The Old Wharf Road.

Down Causeway Road, at low tide, one can see the stones of the causeway which gave the road its name. Only a few have shifted. The causeway was formed by the Black Cuffs, the 58th regiment, who were camped in front of the Treaty House. It was thought after the sacking of Russell in 1845, that Hone Heke, the Maori chief, may cause further conflict and a road inland would make the transport of cannons possible.

The causeway took two to three 3 years in the early 1850s to build and was solely a low-tide road, a rock shelf from Waitangi to the Kaiika and Kaipatiki channels. Here a barge was built and it worked on a rope pulley and pole system across the muddy estuary. Here began the causeway, straight across the river to Whaiwharoa (meaning long walking track). A Maori pathway was widened and ran up the hill and further on. These tracks or pathways were later used by missionaries, then many were widened to become our first roads.

Another first – in 1815, above the Falls beside the river, Samuel Marsden and John Nicholas, travelling from Kerikeri, partook in ‘the boiling of a billy. They carried an iron pot, tea and sugar – a first in recorded New Zealand history.

In the names of the roads around the settlement today one can see reminders of the early days of settlement – Goffe Drive, Yorke Road and Causeway Road.