Russell Kororareka is a small, historic seaside village on a peninsula in the eastern Bay of Islands. Since the 1700s it has provided a haven for visitors, offering shelter and hospitality. Because of its relatively remote location it retains an island quality and a charm that reflects the tranquility of earlier times, where a sense of that history and heritage are treasured. Despite this, it is a vibrant, cosmopolitan community that attracts visitors from New Zealand and all over the world – some of whom have chosen to make Russell their home.

Its sense of community is evident from the pride in supporting its local school, the number of volunteers that help out with a wide range of activities from sport through to manning of local clubs. Visitors will quickly discover that this community is a special place that welcomes all comers and makes them feel at home and still keeps its village flavour.

The settlement, nestled between green headlands, shows signs of its past in street names and building styles. The wharf, built originally in 1879 is still the main route into the town. Before road access was put through in the 1930s visiting steamers tied up here as they brought supplies and travellers.

Buildings line the waterfront still – many historic like the Duke of Marlborough hotel (the 4th on the site) and the Victorian Gothic Customhouse (now our police station).

At the south end of the waterfront sits Pompallier House, site of the first Roman Catholic Mission to New Zealand. Established in 1842 it is now restored to its original French Lyonnaise style, the only one of its type in the country. Leather making, printing and bookbinding can be seen once again.

One street inland Pompallier’s “rival” the Anglican Christ Church is the oldest existing church in New Zealand and has also been restored – except for the musket ball holes in the old weatherboards, visible reminder of the fierce fighting near the church during the 1845 Battle of Kororareka.

Above the town on Maiki (the high place) Hill stands a flagstaff, originally the symbol of British authority and cause of conflict between Maori and the British which led to 1845’s battle. It flies New Zealand’s original flag twelve days a year.

Settlement has spread during the twentieth century to the outskirts of the town – Long beach/Oneroa, Matauwhi, Tapeka, Te Wahapu but on headlands, in valleys and on the coast evidence still exists of earlier Maori occupation. 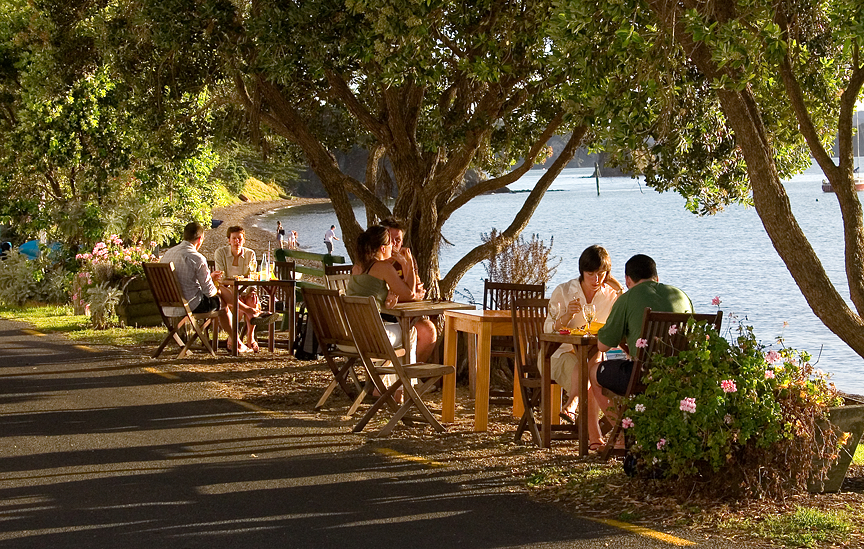